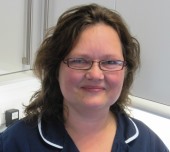 Anneke van Aalten (DVM, MRCVS) owns the practice and can normally be found here, whether consulting or in surgery. Although Anneke loves puppies and kittens she is passionate about caring for older animals. She finds it a real challenge to keep them fit, healthy and above all happy for as long as possible.

She is originally Dutch and moved to the United Kingdom in 1997, after graduation from the Utrecht Veterinary School. During her studies she also completed an extra course on Companionship Medicine at Ecole Nationale Vétérinaire d'Alfort in Paris. She worked in several practices in London and Sheffield, including the PDSA, until finally settling down at Broomhill Veterinary Practice in 2007.

She has three children, (Jasmyn, Sofie and Bijan) two cats (Tabatha and Bertie) and a dog (Noodle). Bertie is named after the vet's mum Bertha who has ginger hair making Bertie the only ginger haired grandchild in the family.